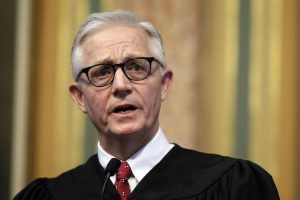 In an accompanying post, the court described him as an exceptional judge who was respected and beloved by his fellow jurists. “His passing is a great loss to the court and the state he so loyally served,” the court wrote. A court spokesman, Steve Davis, said Cady was in Des Moines when he died.

Cady had been a key swing vote on the court in recent years, as Republicans took control of the Legislature and governor’s office and passed new laws aimed at expanding gun rights, restricting abortion and barring gay marriage. Cady wrote the 2009 unanimous opinion that made Iowa the nation’s third state to permit same-sex marriage. The ruling came years before the 2015 U.S. Supreme Court decision that struck down gay marriage bans throughout the country.

Gov. Kim Reynolds ordered on Saturday all flags in Iowa to be lowered to half-staff and to remain that way until a memorial service is held. She said she was heartbroken to learn of his death. “He loved the law, the judiciary, and the state we call home. He leaves behind a legacy of service and dedication that we should never forget,” she said.

Cady, of Ft. Dodge, was appointed to the Iowa Supreme Court in 1998 by Republican Gov. Terry Branstad . The members of the court selected him as chief justice in 2011Branstad, now U.S. ambassador to China, said in a statement that accompanied Reynolds’ that he was proud to have appointed Cady to the district court, appeals court and state Supreme Court. “He was a dedicated jurist who was liked and respected for his strong work ethic and fairness,” Branstad wrote.

Born in Rapid City, South Dakota, Cady earned his undergraduate and law degrees from Drake University in Des Moines. He was appointed a district court judge in 1986. In 1994, he was appointed to the Iowa Court of Appeals and was elected chief judge in 1997 and served until his appointment to the state Supreme Court. He was chairman of the National Center for State Courts Board of Directors and served as president of the Conference of Chief Justices.

Cady is survived by his wife, Becky, two children and four grandchildren.

For information on the benefits of membership go to “About CCJSCA”